Montesa announced major changes in its Cota 4RT!
06/03/2015
Since the appearance of the model 260 in 2014, Montesa has continued to implement significant improvements in their models of trial. Continuing this trend, Montesa Cota 4RT will continue marketed the 260 and Race Replica, which begin trading by the end of July. In its 2016 version presented as main novelty a remarkable increase in power thanks to the adoption of a new fuel pump that provides flow of gasoline. 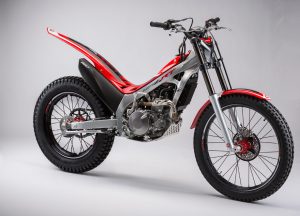 This factor, together with the development of a new mapping of the ECU *, is key to achieving full power curve especially at low and medium engine speeds. But that’s not all, since the power increase should be added a remarkable reduction by cutting gas engine braking, a factor that leads to a greater sense of lightness of the whole.In this sense, the chassis is not without new and has now reposition the footrests, lower and delayed, which also help to lighten the front.

It also highlights the new radiator fan support, designed to evacuate dirt, small pebbles or objects, thus avoiding possible blocking of the fan. Another important new feature, unique to the model 4RT 260, is the adoption of improved D803GP Dunlop tires, surprising for outstanding grip. New features of these tires also affect a significant improvement in touch and lightness in the front.

Race Replica model also gets a new Showa rear shock with the aim of providing higher level of agility and stability with the advantage of providing greater range of adjustment of spring preload.

As in 2015, with Cota 4RT260 model will be delivered as an extension seat attachment focused on the practice of soft trial, trial or hiking. The seat is easily removed and has a hole to carry various objects.

* The versions of the models for export called Full Power (exclusive use in competition), have all these developments along with a dual-map ECU ignition is activated by a switch on the handlebars. Thus, besides the standard map you can also select a second map for low traction conditions. The models for the domestic market can equip equipped with dual ignition map as an original accessory the ECU.
Full details can be found on the standard 4rt HERE
Full details can be found on the “Racing” Repsol version HERE