… well, the best laid plans and all that ! After fitting all the remaining parts to the engine and installing into the chassis I purchased a new chain from Bob Wright, completely forgetting that the rev3’s always had a link and a half installed, and set about filling with oil, fuel, cleaning out the carb etc etc. The time came for the first start-up to see if it all works. Well, good news. It started second kick and tick-over was good … then i blipped the throttle a bit. Nothing much happened apart from i filled the garage up with white smoke!! There was no way the bike would run off tickover… and the gearbox oil was vanishing … !

Having brought the bike with what i thought was a fully rebuilt bottom end i stupidly thought that all was well so had just put the top end and flywheel, clutch and associated outside bits on. What i never thought to check was that whoever built it had put the crank shaft seals in !!! Doh. 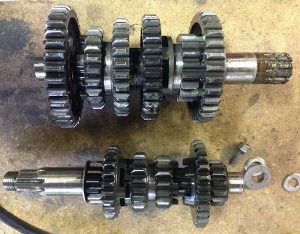 It also suddenly became apparent when i tried to see if the clutch was bled and working ok that there was functioning gears. Bollox ! So out came the engine again, cases split and a good look at what was in there. This was the first time i have seen inside the gearbox of a Beta as every one i have ever owned has been perfect in this department. I had the parts diagram to hand as i took it apart and also Steve Saunders kindly sent over an image from a bike he was working on of the whole gearbox cluster assembled outside of the cases so i could see what was happening.

Turns out that one gear was in back to front and also 2 shim washers in the wrong location. So it all went back together again, tested that all the gears selected ok before putting back into chassis, and obviously put crank shaft seals in during the rebuild process. 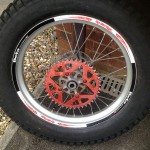 So now i had a rebuilt bike that started and revved out cleanly and didn’t set up a smoke screen around the neighbourhood! In the “sticker” drawer I found some original Beta frame graphics and also the remains of two sets of wheel rim stickers from an old TopTrialTeam kit and a Beta racing kit … enough to do the rear wheel.

I thought i would put one of my old front lights on instead of a number board, although i have a feeling that after faffing around with tape trying to get a number to stick on at the first trial i enter that may change ! One or two new stickers will be put on and then time will come for the first ride … but before that we have a shock issue to resolve.

I had a hop around outside the house and was really impressed with how well and how easily i could hop the rear end around .. especially after so long not riding, out of rider fitness and probably slow reactions! Turns out the rear shock had absolutely no rebound damping, great for carpark hopping but would be a nightmare for actual obstacle riding. The rear shock has been sent off by Steve Saunders for a look at to see what can be done … now really itching to get out for a ride, especially after Steve lent me his daughter Izzy’s Jotagas for a recent event and i went around the whole trial clean to win the Inters class !! 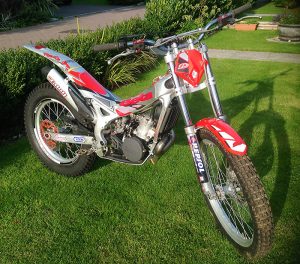