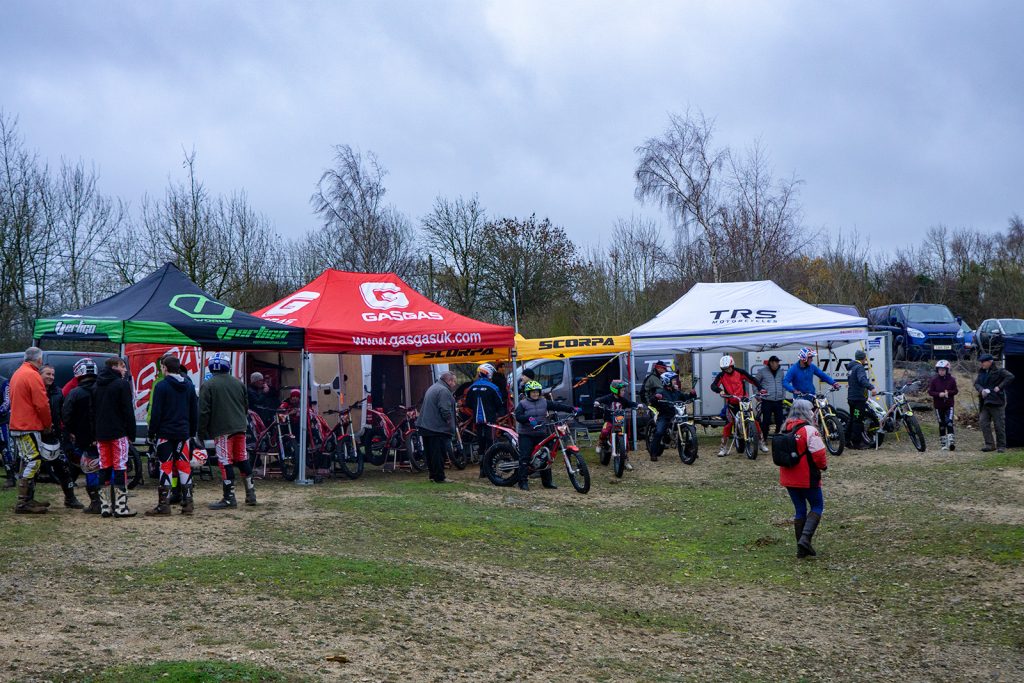 Our local dealer, BVM-Moto, have been having a test day almost every November for probably 10 years now (could be more, getting old so forget!) All the bike companies whose products they sell arrive with a selection of the new model year bikes for the general public to try … free of charge.

TRS, GasGas, Scorpa, Vertigo, Beta and Sherco arrived with their 2019 model year bikes and all we had to do was sign a form and choose a bike to try first. After 15 minutes riding you get called in and you can go back to the BVM tent and picked another machine … and you can continue this until either all machines are booked out or the time runs out!

This year we had Tony Barnett, Phil Elvard, Kev Westlake and myself from the r2w crew at the event, and thankfully they all remembered to send me a few thoughts on some of the machines they rode … so here goes …

Tony Barnet
“The first bike of the day and an easy starter, all be it with a left hand kick start, but a lot easier to kick than an old Bultaco. I pootled off to ride over some rocks and up and down a bank or two – the bike did this well with a good amount of power for such a small engine, and nicely compliant suspension. I found that the motor was quite zippy, sometimes getting ahead of me. That coupled with modern brakes and a fairly light clutch resulted in a few minor out of control moments, but nothing much. I was pleasantly surprised how well it rode – good handling and a lively motor meant that it was a breeze to ride over rocks and then into a quick tight turn. I handed it back convinced that it was the best suited modern bike for me.” 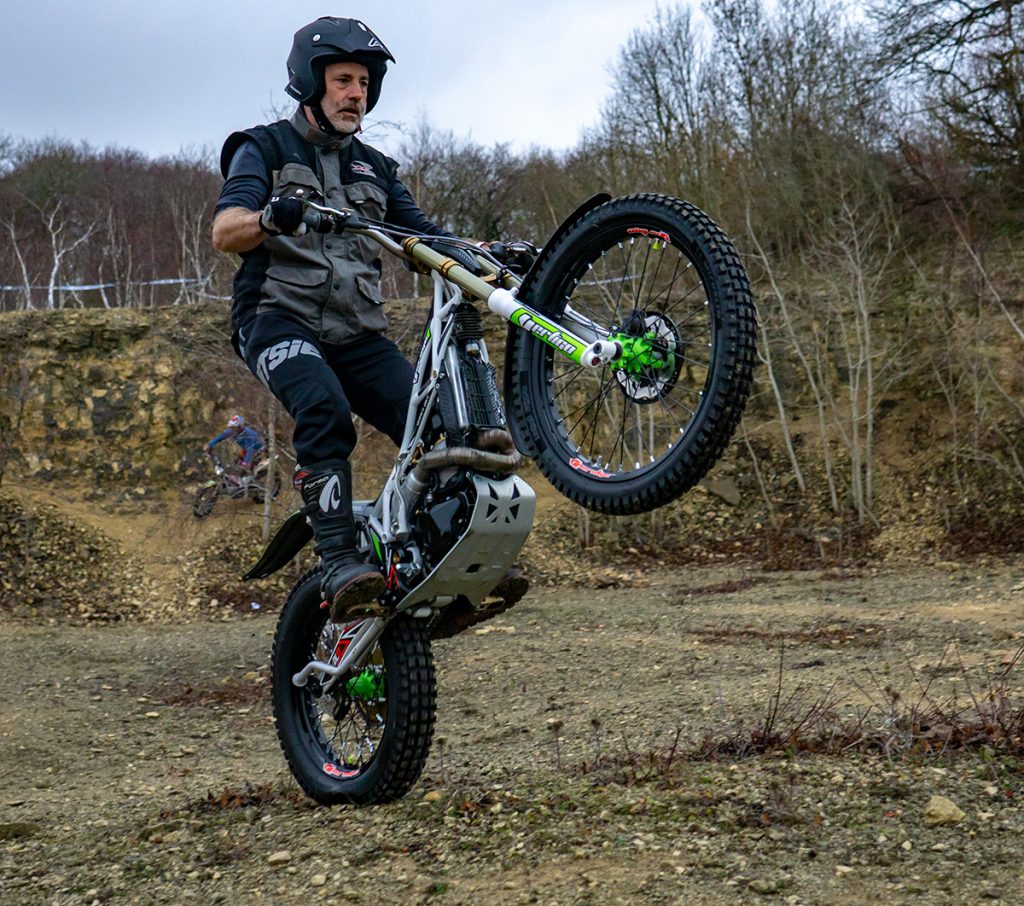 Phil on the Vertigo 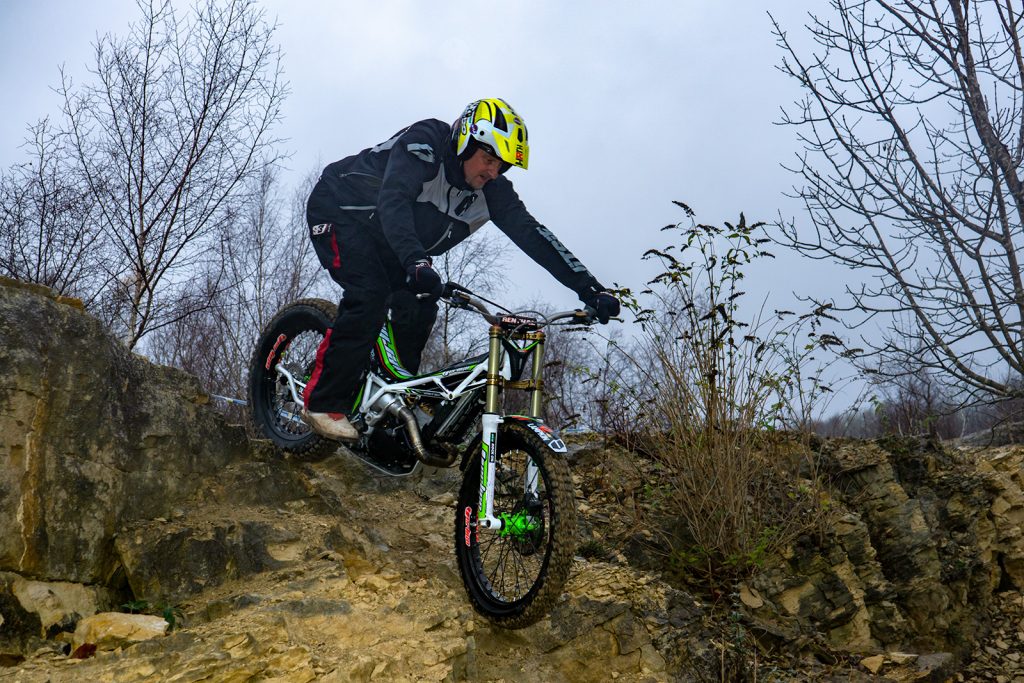 Heath on the 300 Vertigo

Heath
“The 300 Vertigo was the first bike I tried and i have to be honest by saying i wasn’t expecting to like it at all. I had ridden a Ti one a year or so ago and was very underwhelmed by it, perhaps I was expecting it to make me a world round rider or something!! But I was pleasantly surprised by this new 300, as soon as i jumped on it the bike felt “nice” ! Very neutral to ride and easy. I did expect the 300 engine to be a bit more fiery though, and i had switched it into “summer” mode. The biggest minus point for me was the noise! Not from the exhaust but i presume it was the intake noise. The airbox is where you would normally find the fuel tank, and the noise was just annoying to me. No doubt you would get used to it if you owned one, but i found it annoying. 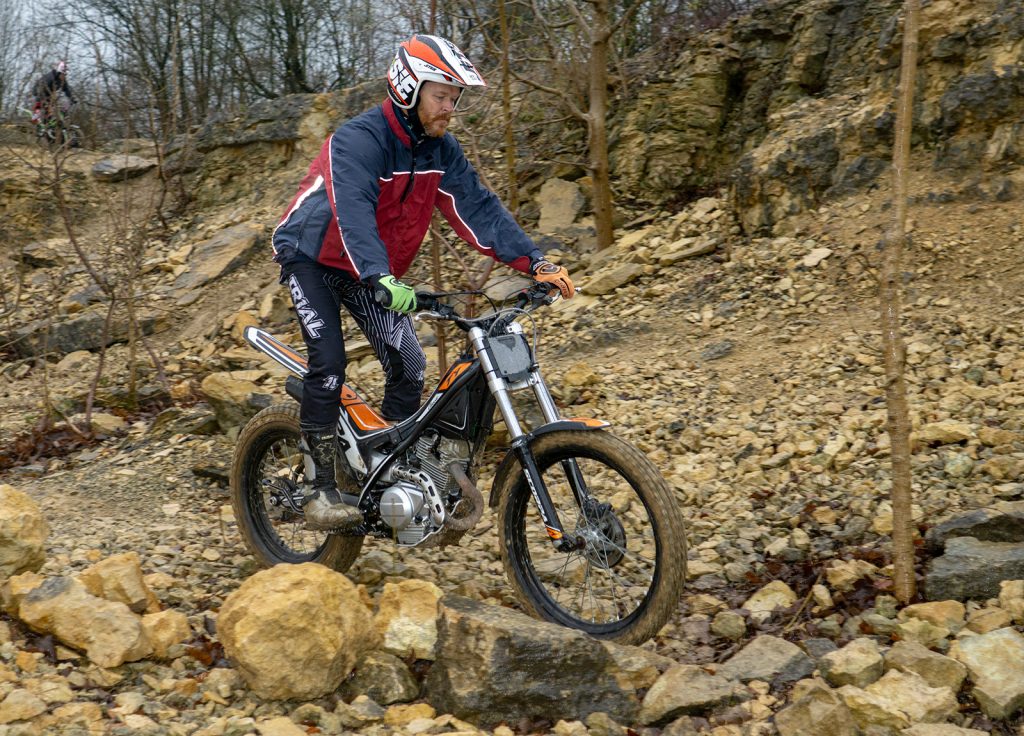 Tony
” Amusingly, no kickstart, only an electric start. Being a 4T it was totally different to the Beta. Nice lazy power, but not excessive and an easy delivery. I really liked this bike. The Orange and black colour scheme looks great too. Same terrain – few rocks and banks – managed with ease. I did, however, manage to drop it on a slow turn when the combination of brakes that actually work and a very light clutch conspired to unbalance me. Ho hum. With hindsight, the suspension didn’t seem to be as `modern’ as the Beta, but a nice package which, as long as you rode it like a small capacity 4T and not a 2T would be quite sufficient for a lot of people. I handed this back thinking that this was the modern bike best suited to me…
P.s. I also tried the Sherco 125 4T … Little did I know that this was a very similar bike to the Scorpa. But this one came with a kickstart fitted as well as the electric start. Pretty similar in performance and looks in my eyes. A nice bike and easy to ride. I’d struggle to choose between this and the Scorpa.. be just a colour choice really. 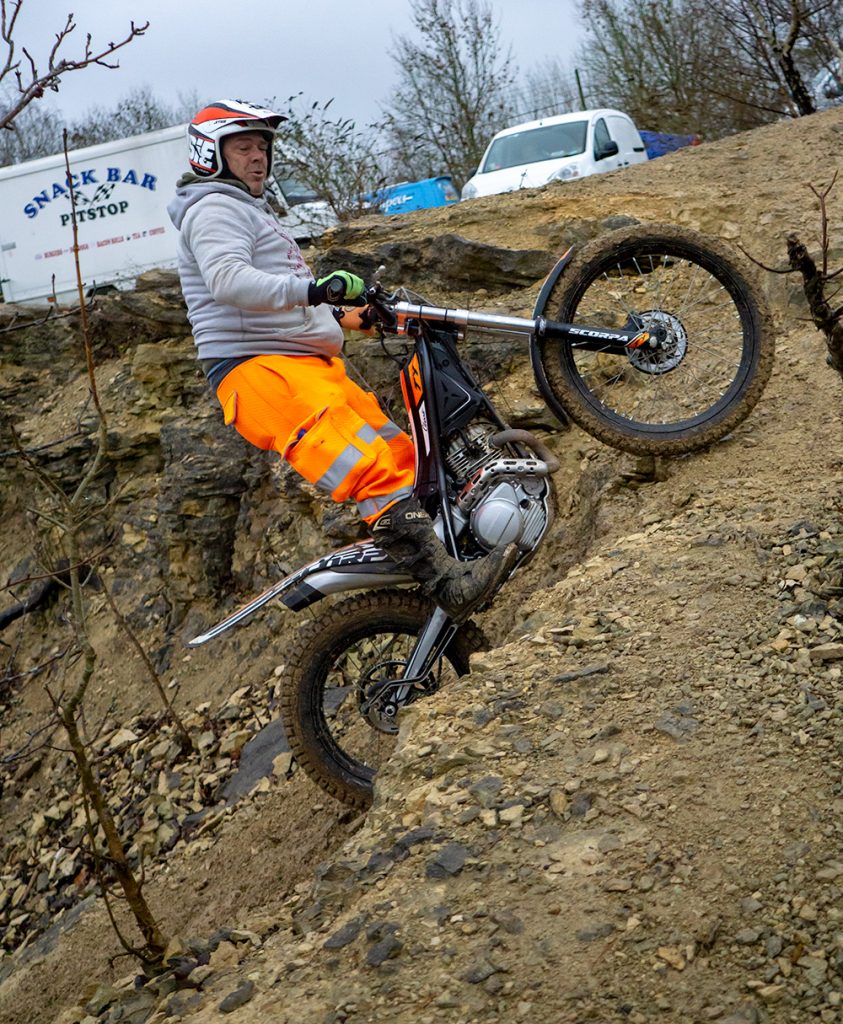 Kev on the little 4T Scorpa

I did like the exhaust mod not sure if there is any power gain buy removing the cat but it is a good mod because the front pipe sits a bit low and I think would be easy to damage and I probably would relocate the choke from the handle bars which could be a problem, as it was on the old scorpa if the cable wasn’t positioned correctly on starting the bike. It’s very quiet and personally I would like a bit more noise but for most riders it probably ok.
On riding the bike  the gearbox was smooth and changed gear nice. I would say that first and second gear needs to be a bit closer together which would make second more usable. The hydraulic clutch was nice and light but not as light as my old cable clutch on my old 125 scorpa which as been modified but the hydraulic one does the job it’s intended to do. Power wise it was ok, very smooth and usable. But for me the bike would benefit from a big-bore kit just to give it that little bit more, but I am 15 stone but for the 11 stone rider which it’s probably intended for its more than enough power and will keep you out of trouble
Overall a great bike and I guarantee it will improve your riding”
Phil
“I had a go on the Air cooled 125 Scorpa which, at first, I thought was horrible but after a while it became entertaining by having to ride round the small capacity 4T engine. Once I got used to this it was a fun little bike. 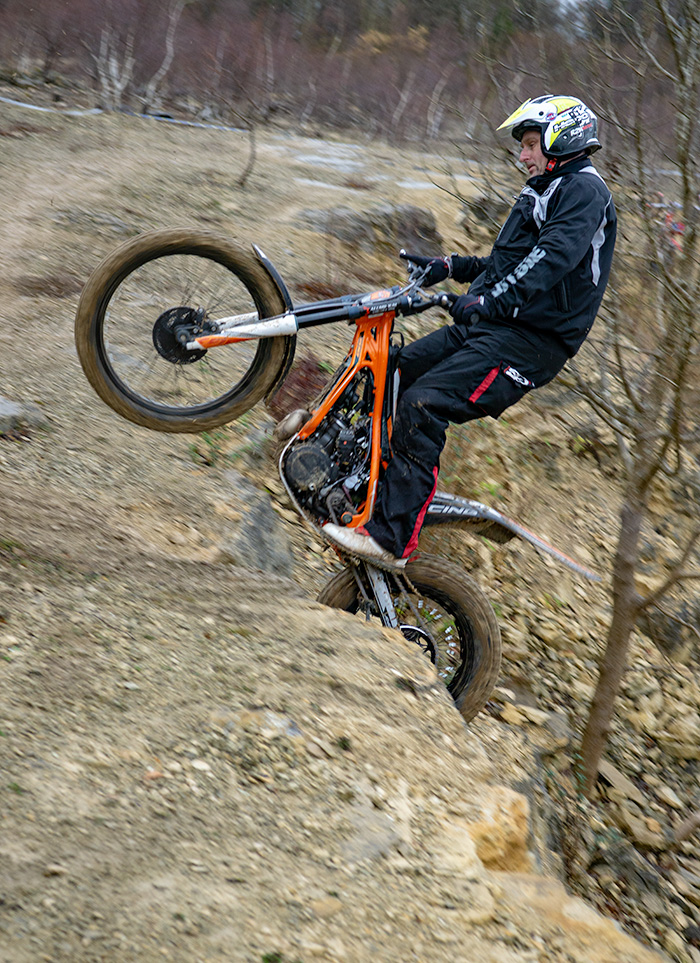 Heath
“Now this does feel like a 300, plenty of grunt but still very easy to ride. I really enjoyed my 15 minutes on this machine. I took this into the small muddy area in the trees for a play and it gripped well over the roots and the clutch wasn’t too sharp to induce spinning. When i rode in my normal clumsy manner up the rock steps i would say it didn’t feel as controlled when i hit the step … probably down to rear suspension set-up and also to the fact that better 300 riders would hit things a little less heavy 🙂 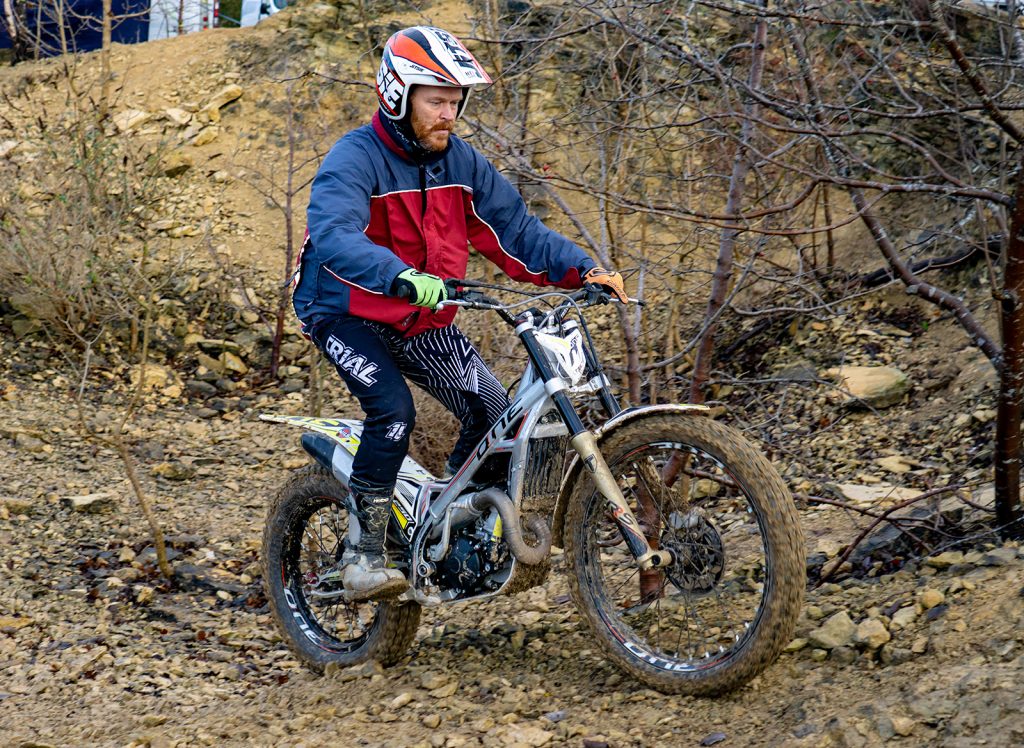 Tony
“So, what does `soft tune’ mean? Well I was expecting that it was just a standard 250 with a soft ignition map, but no – there have been changes to the engine and other items so it truly is a soft tuned bike (I did ask the TRS guy who gave me the lowdown but can’t remember the details now).
First impression – I can’t tell the TRS’s apart, but they all look great. Nice bright colours (particularly if you want to dress up to match and look like a trials riding banana). I went off to ride the same terrain as the earlier bikes, and instantly noticed the suspension – felt really compliant and positive. In fact the bike proved to be very confidence inspiring with excellent manners and brilliant handling. Being a 2T I was expecting a zippy motor but the soft tune had eased the power delivery so for me, a novice who rides a Fantic 200, it was perfect. I happily went over rocks and up and down banks loving the way the bike worked. A cracking machine.

If I had to conclude which one I’d buy it’d be the TRS. The perfect package for me. But the others were also great and I’d be happy on any of them. 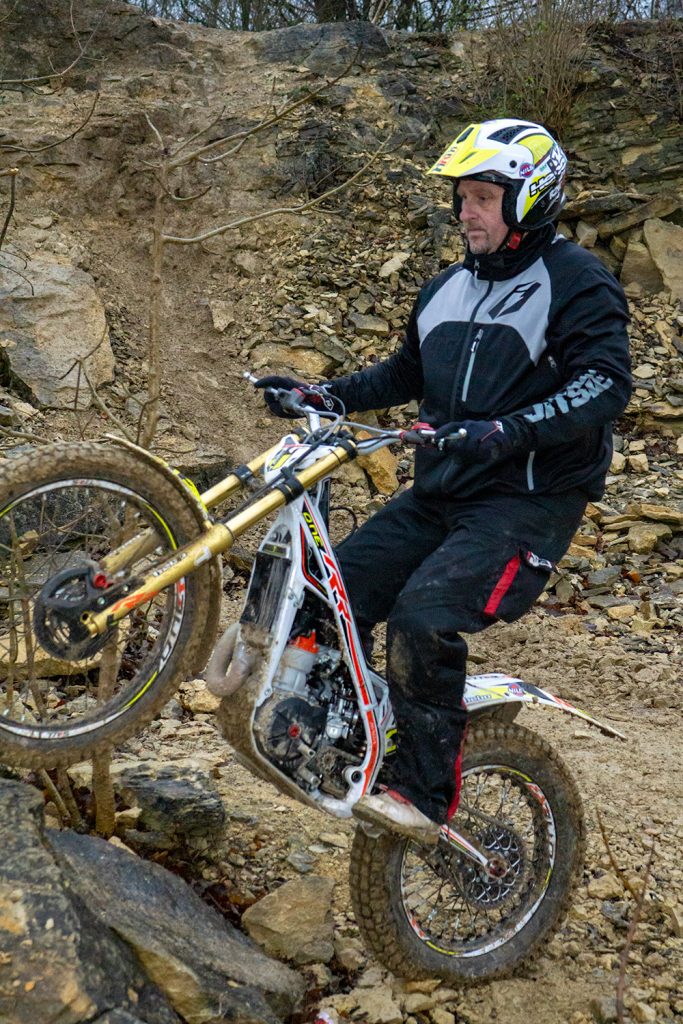 The first one i tried was the 300 One, or what I will call the standard model. Of course as soon as i got on the bike it felt familiar. The clutch was perhaps a little quicker than mine, possibly down to the fact that my own bike is now 2 years old, but otherwise it just seemed all good to me. I do have the Reiger rear shock fitted on my bike but the new standard rear shock performed well on the rocks and roots at the test venue. I also do like the new graphics on the standard ONE. A little secret here, i’m actually not a big fan of the white frame on the RR so it was great to see the bare alloy remain … although i still have a liking for black 🙂

When i hopped on the RR it did feel a fair bit different. The clutch does feel much sharper to me, but it can be tamed down a bit if required, and the power delivery is awesome … but would probably carry me away a bit too often. The extra engine performance on the RR isn’t just down to the Keihin carb, they have different heads and i believe ignition curves are changed from the standard model. In fact the engine is  amazingly different. New cases, water pump and i believe some internals. Personally I think the standard ONE is the best bike for the majority, but as we see with bike sales these days people almost always head for the race model … and then spend extra money knocking the performance down so they can ride it !!

Towards the end of the day Ross Danby let me have a play on his 280 TRS ONE that we had all watched him ride up just about anything on the quarry face with ease earlier. Ross has for years, in fact i think since his schoolboy days, ridden with an Ohlins rear shock and also prefers the stronger performance of a Keihin carb. Both of which he has fitted to the 2019 Standard ONE he now rides. To save space and time i will just say this bike was absolutely lovely to ride, so much so that I am seriously considering trying a keihin on mine. Not that i have anywhere near the ability of Ross, but just loved the feeling of the power delivery off the bottom end. Luckily I can borrow one to see how it feels before splashing the cash!

Quick thoughts … from Phil
Soft tune TRS 250 one was spot on …very smooth and tractable… felt like I could ride it over anything and it had lovely steering… Steve Saunders said that would be partly down to the soft tune…. Beta 250 was ok but felt difficult to steer which may have been down to the bars being to far forward for me.
After talking to Martyn Wilmore I tried the TRS 125 which was absolutely fantastic…. not like any 125 I have ridden before…very tractable with pin point steering.. After loving the 250 soft TRS I plan to buy an X-Track with the soft tune, this will be perfect for trials and also allow me to ride long distance trials i enjoy.

It wasn’t until we had finished that we realised none of us had ridden a GasGas all day .. it wasn’t a conscious thing. Every time I went back to pick the next ride there was a long wait for a go on the model i wanted to ride, and a couple of the others seemed to think that as the bike has been similar for a long time there wasn’t really any point in waiting.

Many thanks to Tony, Phil and Kev for their words and for grabbing my camera to get some images of me riding.
Also thanks must go to all involved at BVM-Moto for once again their perfect organisation and the chance to try these machines all in one day. And also all the importers without whose support this event wouldn’t be possible.