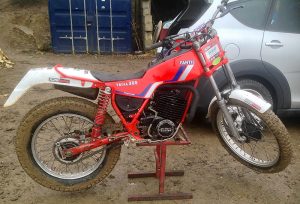 After a few weeks of getting the steering side of the Fantic 300 sorted out, wanted to make sure the new top yoke cleared the tank covers to give full lock, it was time for a ride. I have been popping it around the driveway for 10 or 20 minutes here and there but it needed to go out into the dirt to ride a few sections to see if any problems would arise.

A trip up to the Nettleton quarry, location of the Zona 1 mcc practice club, was organised. It started to piss it down with rain half way up the M5 and I can confirm that the Fantic electrics are waterproof ! .. It started 3rd kick.

The first hour went really well, I was pleasantly surprised at how it steered and the engine power was as I remembered it 31 years ago. It had plenty of get up and go and the clutch was light enough to use one fingered, glad I had decided not to fit a lightener now as that would have made the lever movement a bit strange. I was a bit worried about the rear shocks as I had rebuilt them with lighter weight oil and they seemed a bit bouncy at home, but with the rear tyre down to riding pressure they worked really nicely. The front forks were ok .. nothing special but then they are very old school with no adjustments apart from stacking something under the caps to pre-load them.

There was one nasty moment … I had been testing the front forks and front brake on some drops and banks and it all worked well, the front brake was very good in fact. After playing on the concrete pipes for a bit I then rode down the bank towards the carpark and went for a bit of rear wheel hop and then all of a sudden I was over the front and cracked my chest into the bars before hitting the ground. Turns out the bars had spun in their mounts, I had tightened them up the night before so was a little confused .. and bruised! I re-tightened and continued after a suitable break to get my breath back.

I rode around and tried a few more sections and was very happy with the bike when all of a sudden there was a strange noise from the gearbox area … which then disappeared as fast as it had arrived. I was a bit concerned so after Bob had a quick ride on it I decided it was time to go home and check it out. I was sitting there saying goodbye to Bob, with the bike on tickover, when there was a crunch and the bike stopped. Definitely time to go home !! The image below shows what i found when i took the engine side casing off .. seems two tangs from the clutch basket decided to break off, and as nothing else is laying in the case I have no idea why. 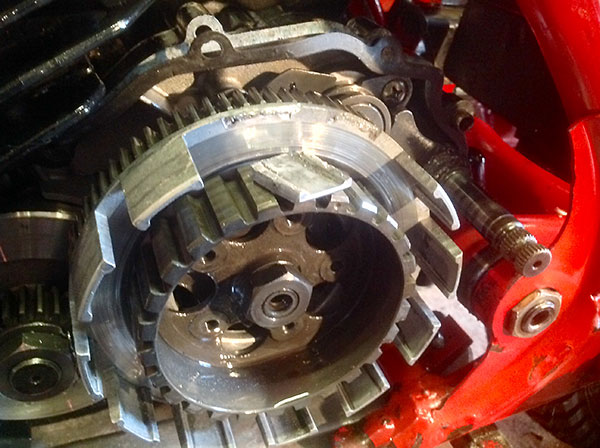 There are no other parts at all laying around inside the case, and nothing that I can see is missing from the gear selector or anything else inside that casing. I have another 300 Fantic in the garage that requires building, I will borrow the clutch basket from that one whilst i source another … hopefully a quick job and I can go and test it again.