Although Bank Holiday weekends are not a time i traditionally enjoy travelling up or down the M5 I thought i would give it a go this weekend as it is half term and i figured all the holiday makers have all week to get stuck somewhere else !!

The Hawks Motorcycle Club up in Gloucester always put on a nice trial, mainly aimed at Pre65 and twinshock riders but also many modern bikes come out for a play … which is nice as there is nothing nicer than possibly losing less on a 31 year old bike than some super duper modern racing machines 😉

My Fantic 300 is going to undergo a few changes soon .. nothing cheat bike style but i have decided to try and build a “works replica” using info i got from a nice chat with John Lampkin at the St. Davids trial last week. For those unaware i have 2 of the 300’s here at present, one is a French spec 239cc machine and it is that bike which will probably be the basis for my Works one. Bob is doing my spare side covers in white and I have the Michaud replica graphics kit already, soon i will have a Mikuni carb to play with as well. Steve Saunders has all the jetting and setting up details that was used by the Factory team at the time so that should be a relatively easy change over. I will investigate moving the chain tensioner from the back engine bolts to the swing arm as well and of course chop the rear frame loop off to match the team bikes. 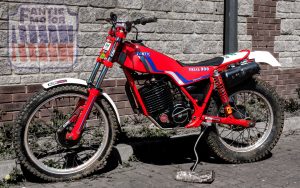 John Lampkin did report that they had lots of tuning done on the barrel but I wont go that far as i am sure the standard bike with the mikuni fitted will be enough for me to play at twinshock events on. I will of course retain the 200 pro style top yoke with the bars a little further forward but wont do any changing of geometry or footrest position etc .. in fact i want to keep the original footrest posts so will investigate getting some more modern style footrests made with the correct mounting.

Anyway … the trial went well. I have been taking an age to get into the swing of trials lately, usually having a crap lap or two before finally riding something like i know i can, but i got into the groove very quickly yesterday and completely cleaned the first lap. Just as i started the 2nd it rained, and the turns all became very slippery and the polished rocks on a few sections took on a glass like coating! But i managed the second lap for a single dab and then on the 3rd I had a paddling three when a tree branch wrapped itself around my foot and nearly ripped me off the back of the bike !! To make up for that I cleaned the last lap. Not seen the results yet but I think that is all i lost … may be a surprise in there somewhere though.

Good to see Bob out on his new Montesa 4rt and also Craige on my old Beta Rev3 .. both seemed to be getting used too their new bikes and certainly enjoyed themselves. I rode around with a small group all day that included an almost new Sherco, a Beta Evo, several other twinshocks and a pre65 machine, really nice to just watch the different ways we all had to ride our bikes to try and achieve the same aim.

The bike ran fine, carburation is a bit out but as i will be doing mods to that soon it can stay for now. I have rebuilt the rear shocks with new seals and oil and think i may have gone a little too light on the oil weight. Very bouncy now which is nice but they may be just a little bit too bouncy.. will try my spare set with a tad thicker stuff. Thanks to all at the Hawks club for a great trial, good to see so many other twinshocks and pre65’s