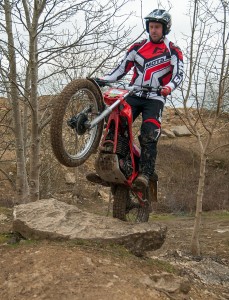 After last weeks problem with the clutch it was time to go for a play up at the quarry again. To re-cap, after an hour of riding last time out there was suddenly a crunch and everything locked up in the gearbox department. Turns out that two of the clutch basket tangs had broken off … no idea why, i can only assume i missed the cracks before i put the side cover on.

As i have another 300 Fantic in the garage it seemed only sensible to open that one up and grab the clutch basket so that i could continue the testing.

Tony and i met up at Nettleton at mid day, well he was there as i was still sat half a mile down the road in the traffic queue. Seems an Italian lorry and an Audi tried to go from two lanes down to one at exactly the same time ! 2 kicks and the 300 fired into life, and we were off. The clutch is surprisingly light on the 300, even without an extended arm modification. I have fitted a Venhill cable and made sure the routing was as direct and straight as possible and it is a one finger operation clutch … bonus. 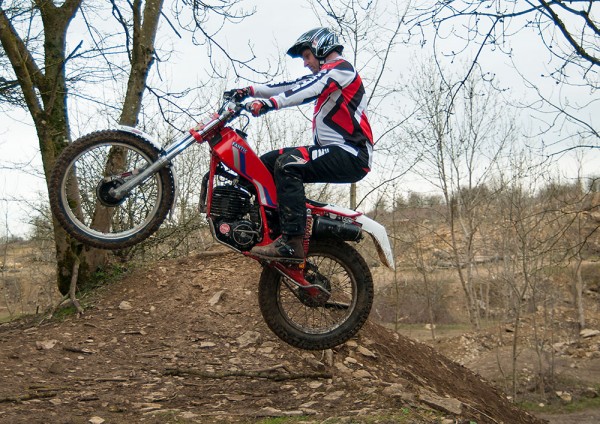 Not really much to report other than the bike performed faultlessly all day. I poured what seemed like 20 litres of fuel into that huge tank and just rode … for 4 hours. Brakes are good, starts easily, rear suspension surprisingly good and riding position seems ok … only thing i discovered was that it had a slow action throttle tube fitted, which has now been changed. One more test ride and i think it may be time for a twinshock event!

.. It has now got better forks fitted, the lowers are red with original graphics on and the top yoke is also now red. I trimmed the rear mudguard down like I did with my new one in 1984 as the number plate size bit just looks stupid ! 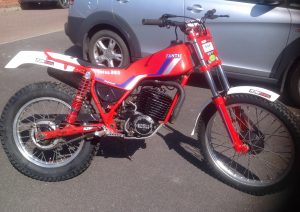